Overall Design of the ReFactor Loom

One of the first subprojects we’re working on as part of ReFactor is a loom. We decided on a loom partially because it’s a nice, complex piece of machinery with a bunch of different aspects that are tied to the path dependence problem, but also partially because it’s arguably the machine that kicked off the First Industrial Revolution in the 1700s.

This is going to be a short blog post giving an overview of the loom as it’s currently conceived, and we’ll add some more posts documenting its progress and the changes to the design that we end up making.

As always, all of the designs for these projects are on GitHub. The loom in particular is here.

When we set out to work on a loom, we decided to focus primarily on making it quick and easy to set up. As mentioned in the overview of ReFactor, looms are a huge pain in the ass. One of the main reasons is the complexity and time required to set up a loom. One part in particular, the heddles, are a nightmare.

The heddles on a loom serve to grasp the wrap threads, which must be moved up and down in various ways to do the actual weaving process. Typically, heddles are some kind of loop suspended on rods or thread. Each warp thread passes through a single heddle loop. A single loom can have hundreds or thousands of heddle loops, and each warp thread must be manually threaded through the loops. 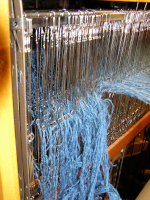 This process is incredibly time consuming, as you can see in the video below, which demonstrates this process for a loom with heddles made of string. Therefore, one of the design constraints we have is that threading the heddles must be fast. Our goal is less than 5 minutes.

The same issues are true of the beater and reed. The reed is typically a series of thing metal rods or wires called dents (because “teeth”), which kind of look like a comb but closed on both sides. Threading the reed is just as time consuming as threading the heddles. 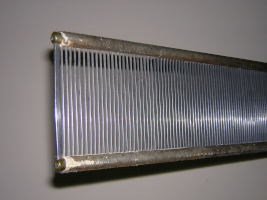 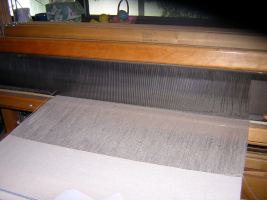 We also want the loom to be automatic. The process of manually weaving fabric is incredibly time consuming and boring. It’s one thing to operate a loom for the zen relaxation of the whole experience, but there just aren’t enough people in the world who want or need that to produce all the textiles we need. But unlike most of the kinds of tools that hackers typically design, we want to avoid using computer control. Computers are a cheap, but they’re an unnecessary tangle with global supply chains, so if you can get away without computers, then the design is improved. Given that no automatic loom used a computer to control it until fairly recently, relying instead of standard mechanical design principles for control, this isn’t a huge constraint.

A happy benefit of not relying on computers for control also means that the loom we end up with could in principle run in places without substantial amounts of reloable electricity. Wind, water, pedal power, etc. would all work.

To address the 5 minute constraint on setup time, the design of the heddles and reed simply cannot be close loops as is common. They have to instead be fully open. Some looms, such as tapestry looms, already make use of such a design for both the heddle and reed. In those designs, you have what are called heddle bars, which are rods with slots cut in them at different angles to raise the warp threads. There are lots of images on Google that demonstrate the principle.

For our loom, we’ve decided to use something similar to a heddle bar. Our heddles consist of a stack of cams on a rod, separated by disks. The disks form channels that each warp thread sits in, unable to move left or right. As the cams rotate, they lift and lower the threads, like a heddle bar. We place the cams at 180° angles so that they raise alternate heddles, but you could in principle put them at multiple angles, in different sequences, to weave more complicated patterns. Below you can see a prototype of what the heddles will look like. 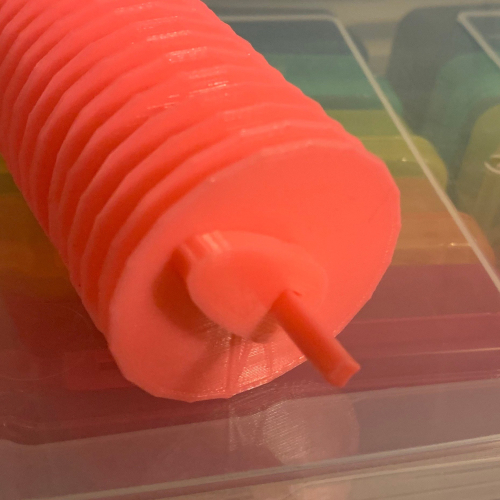 One reason we want to use cams and disks instead of heddle bars is that, while heddle bars are much much simpler and faster to make, every heddle on it is rotated simultaneously. This limits the designs you can make to simple repeating patterns. This is analogous to how non-jacquard looms are constrained. By using cams, we could theoretically put gear teeth on the heddles and drive each one independently with a rack and pinion mechanism, connected to something like a jacquard control mechanism.

Another design component is the weft thread insertion mechanism. There are a variety of mechanisms that exist in industrial looms currently. Shuttles are the classic design, where the weft thread moves back and forth through the sheds on a shuttle that carries the bobbin. These of course are heavy, and therefore slow, and they have a limited amount of thread they can carry, so flying shuttle looms require operators to periodically change out the bobbins. Air and water jet looms carry the weft thread across the shed by means of jets of air/water moving down a channel, and kind of end up looking like a vacuum cleaner sucking up the thread. These have the disadvantage of needing complex reeds to channel auxiliary booster air/water, and also need pumps. Projectile looms use a small shuttle-like object with a hook to grab thread and move it across the shed. They typically require multiple projectiles to operate at high speeds, and need somewhat complicated transport mechanisms to return the projectiles to the originating side of the loom. Rapier looms are a purely design that uses a retractable arm (or two) to move the thread across the shed. Rigid rapier looms have the disadvantage of being very wide (twice the width of the woven fabric, because the rapier needs to both span the fabric and also fully clear it when retracted), but flexible rapier looms can use tape measure-like coils of metal to act as the rapier and take up much less space. You can see explanations of these mechanisms in this video:

We’ve decided to go with a flexible rapier design because they can be fast, and allow effectively unlimited fabric length with no operator required to oversee the loom. Since tape measures are rather abundant and cheap, the rapier itself can be a repurposed one, making the mechanism effectively a commodity item at this point. All that’s required is to add some helper mechanisms to provide the thread and manage it during weaving. We might at some point also look into projectile looms as well.

There are some newer kinds of looms, called multiphase looms, developed in the last decade or two, that use complex structures to manage the weft thread. Some of these may be good designs to look into for future versions of the ReFactor loom, but they’re exclusively industrial machines, currently, and would probably need to be prototyped more than an older, more established loom design. They also have the disadvantage of being able to do only simple designs, so don’t have the potential to scale in quite the same way as the current loom. You can see two very different multiphase looms in the videos below.